The new Panigale V2 Bayliss 1st Championship 20th Anniversary celebrates one of the most successful riders of all time and the symbol of an entire community: Troy Bayliss. A special motorcycle, manufactured in a numbered series, the pure expression of Ducati sportsmanship and a tribute to a timeless passion.

Based on the Panigale V2, this version is made unique by the special livery, inspired by the 996 R on which Bayliss won his very first world championship title in 2001, and by the prestigious Öhlins components, that bring the track performance of the Panigale V2 Bayliss 1st Championship 20th Anniversary to a whole new level. 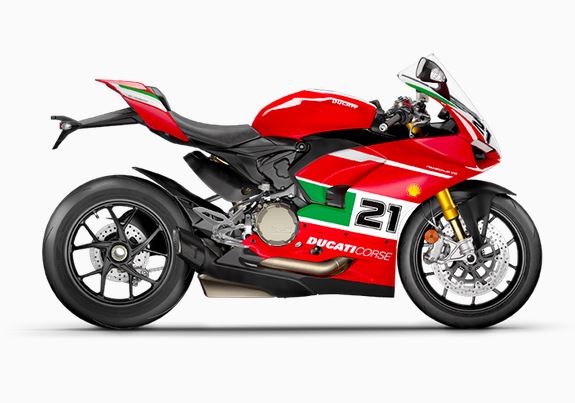 Like the Panigale V2, Performance enhancement largely stems from the new injectors (two per cylinder, one above and one below the butterfly, larger, and re-angled) and the new inlet ducts which, delivery rates remaining equal, lose less pressure than their predecessors, thus boosting intake efficiency. Oval throttle body dimensions remain unchanged with an equivalent diameter of 62 mm. Throttle bodies are controlled independently of each other via a full Ride by Wire system.

The Panigale V2 Bayliss 1st Championship 20th Anniversary is characterized by its special celebration livery, inspired by the 996 R bike that accompanied Bayliss during his conquest of his first world title in 2001.

Ducati red is the main coloor of the bike, and it joins green and white in a tribute to the Italian spirit of the Bologna-based motorcycle manufacturer, while the iconic #21, Troy Bayliss’ race number, and the Shell logo, which visually strengthen the link with the racing bike, stand out on the sides and front. Troy’s autograph is reproduced on the fuel tank, while the billet aluminum triple clamp shows the name of the bike and the progressive numbering of this unique model.

The track spirit of the Panigale V2 Bayliss 1st Championship 20th Anniversary bike is also expressed in the prestigious Öhlins components: the fork, steering damper and rear shock absorber allow a much higher performance on the track, in addition to giving the bike an even more sporty look.

Compared to the Panigale V2, the Panigale V2 Bayliss 1st Championship 20th Anniversary is more than 6.5 lbs lighter, thanks to the use of a lithium-ion battery and the choice to adopt a single-seater configuration that explicitly recalls the track alignment of the bike used in the racing season (passenger seat and foot pegs are available by request).